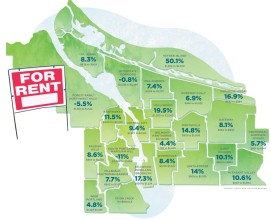 Without a doubt, 2015 has been a tumultuous year for Portland’s housing market. Rising rents, stagnating wages, bidding wars, and building have all been in the headlines. While construction is increasing, and there has been some assistance for low income housing, Portland’s Housing Crisis is all too real for many. Oregon just passed the 4 million population mark in November, with over 29,000 households moving to Portland since 2000. State lawmakers are pledging to put housing as a priority for next year’s legislative session.

According to OPB’s recent article, here are some of the most important numbers for housing in Portland in 2015:

What will 2016 hold for our great city? Learn more here.

What People Are Saying About The Dawkins Group